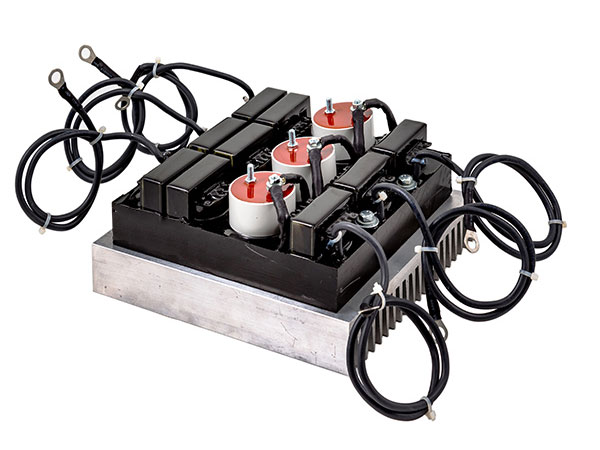 Among them, M is the modulation ratio; N is the ratio of the carrier frequency to the fundamental frequency of the power grid; Jn(x) is the Bessel function of the first kind, and the expressions are shown in equations (1.2) to (1.3) respectively.

From formula (1.4), it can be obtained that the ratio of each harmonic in uinv to the fundamental wave is (1.5).

Among them, M and N are calculated by the parameters in the table of Figure 1: M=0.778, N=300, and the harmonic spectrum of uinv is obtained as shown in Figure 2.

In the case of unipolar SPWM strategy, the harmonics of the inverter bridge arm output voltage uinv are mainly distributed around the switching frequency and multiples of the switching frequency, and the largest content is the (N±1) harmonic. Since the filter’s attenuation ability to harmonics increases proportionally with the increase of the harmonic order, it is only necessary to suppress the (N-1) order of dominant harmonics to the range specified by the standard during filter design. The simplified LCL circuit considering only the (N-1) order of dominant harmonics is shown in Figure 3. Since the grid basically does not contain (N-1) order of harmonics, the grid can be regarded as a short-circuit state at this time.

1. Consider the current ripple content on the inverter side

From equation (1.4) and the previous analysis, it is known that the inductor current iL1 on the inverter side mainly contains N±1 harmonics. Consider here to suppress the N-1 harmonics to 10% of the rated current Irated, that is

From Figure 3, the effective value of the (N-1) sub-harmonic current in the inductor current iL1 on the inverter side is:

the above formula can be simplified as

Knowing from the above formula, the magnitude of the current ripple on the inverter side is mainly determined by the value of L1, and has little to do with L2 and C1. According to formula (1.6) and formula (1.8), the value range of L1 can be obtained:

Substituting the relevant parameters into the above formula, we get: L>0.43mH.

After determining the value range of the inductance L1, the magnetic core is selected for inductance design. The magnetic core should be selected from a magnetic material with low high-frequency loss and an appropriate structure, such as sendust, ferrosilicon and other materials. In order to reduce the size, weight, and cost of the filter as much as possible, and make full use of the magnetic core, the total loss (that is, the sum of the iron loss and the copper loss) is as small as possible, and the final value of L1 can be determined. In this example, combined with the ferrosilicon core specifications of a certain company, L1 can be selected as 0.6mH.

According to Figure 3, the (N-1) harmonic content in the grid current ig is:

Substituting the relevant parameters into the above formula: L2C1> 2.83 (mH·μF).

3. Consider the total inductance voltage drop of the filter

According to formula (1.4), under rated working conditions, the impedance voltage drop UL generated by the inductance of the LCL filter should be less than 10% of the grid voltage. Substituting relevant parameters into equation (1.4), and taking into account that L1 must be at least greater than 0.43mH in step 1, so the value of L2 is limited to

Take the double closed-loop feedback control scheme of grid current and capacitor current (the control scheme is shown in Figure 4) as an example to analyze the influence of LCL filter parameters on the suppression effect of grid background harmonics. The following analysis methods are also applicable to other current control schemes, so I won’t repeat them here.

Substituting formula (1.19) into formula (1.18), the transfer function from ug to ig is obtained as:

The amplification factor of the system to the grid voltage is

The above formula is a function related to L2, σ, kC and ω, where ω=2πf, which is the harmonic angular frequency.

Figure 5 shows the variation of the system’s harmonic amplification coefficient to the grid with the inductance value L2 when kC=0, σ=3×10-9. The 3rd, 7th and 23rd harmonics along the direction of the arrows in the figure are respectively the 3rd, 7th and 23rd harmonics. In the low frequency band (3rd to 23rd), the harmonic attenuation ability gradually weakens as the number of harmonics increases. In addition, when the product σ of L2 and C1 is constant, as L2 increases and C1 decreases, the harmonic amplification factor drops sharply. When L2 increases to a certain value, the downward trend slows down.

At present, the performance of high-frequency capacitors can be very good, and within a certain range, as the capacitance value increases, the volume and cost of the capacitor increase relatively small; as the inductance increases, the volume, weight, cost, and loss will increase significantly. Therefore, when the ability to suppress the grid current ripple is constant, that is, when the product of L2 and C1 is constant, the larger the value of C1, the smaller the value of L2, the better. However, as can be seen from Figures 5 to 7, as L2 increases and C1 decreases, the system’s ability to attenuate grid harmonics gradually increases. Therefore, from the perspective of suppressing the influence of harmonics on the power grid, it is hoped that the larger the value of L2, the smaller the value of C1, the better. In addition, after the value of L2 is greater than 0.3mH, the downward trend of the power grid harmonic amplification coefficient begins to gradually slow down. Considering a compromise, the value of L2 is 0.3-0.5mH. After determining the range of the inductance L2, select the magnetic core model for inductance design; the same as the design of the inductance L1, based on reducing the volume, weight, cost and making full use of the magnetic core as much as possible, the final L2 is 0.36mH.

Substituting the value of L2 into formula (1.13), the value range of C1 is obtained: C1>7.9μF. In addition, from the perspective of suppressing the harmonics of the power grid, the smaller C1 is, the better, so C1 takes 8μF.

Know the value of L1 and the minimum product of L2C1 (2.83mH·μF) from the first four restriction conditions, and the maximum value of capacitor C1 (16μF). The total energy storage Wenergy of the filter can be expressed as a function of the capacitance value C1:

The relationship between the total stored energy and the capacitance can be drawn through the known parameters, as shown in Figure 8.

As can be seen in Figure 8, when the capacitance value is 5.5μF, the total energy storage is the smallest, so C1 takes 5.5μF, and the grid-side inductance is 0.51mH. Also verify that the resonance frequency is: