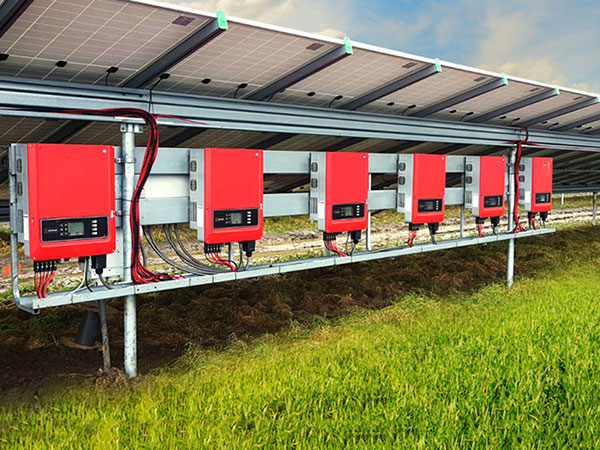 Like single-phase, the leakage current can be suppressed by increasing the impedance of the common-mode loop, so three-phase grid-connected inverters generally also add power-frequency or high-frequency isolation transformers. But the connection method will be different, according to the grid connection conditions, choose the star or triangle connection. The three-phase grid-connected inverter with isolation transformer has better leakage current suppression capability. However, as analyzed in a single-phase inverter, the disadvantages of low efficiency, high cost, and large volume and weight brought about by the isolation transformer cannot be avoided.

Like single-phase, adding a common-mode filter is also an effective control method for three-phase grid-connected inverters to suppress leakage current, which will not be repeated here.

According to the summary of the single-phase leakage current suppression approach, if the total modulus voltage is made constant with an appropriate switching modulation method, the leakage current can be completely eliminated. This method can be analogized to a three-phase system. Table 1 shows the relationship between the switching state of the three-phase full-bridge inverter and the common-mode voltage VCM using the traditional space vector modulation (Space Vector ModuLdtion, SVM) method.

The SVM method can generally be divided into continuous SVM and discontinuous SVM. Generally speaking, continuous SVM allocates zero vectors v0 and v7 in one switching period, while non-continuous SVM allocates only zero vectors v0 or v7 in one switching period. It can be seen from Table 1 that the common mode voltage vCM generated by the above two SVM modulations varies between Udc/3, 2Udc/3, Udc or 0, so this modulation method cannot suppress leakage current. The main principle of the modulation strategy that can suppress the leakage current is that the zero vectors v0 and v7 are no longer used, so they are collectively referred to as zero-zero vector pulse width modulation (NZPWM) common-mode voltage suppression technology. Different NZPWM modulation strategies only choose different voltage vectors, and the modulation strategy to reduce the common-mode voltage can be summarized as: random state SPWM (random-state SPWM, RSPWM), active zero state SPWM (active-zero-state SPWM, AZSPWM) and adjacent state SPWM (near-state SPWM, NSPWM). AZSPWM has two schemes: AZSPWM1 and AZSPWM3.

The AZSPWM1 strategy uses the other six switch states to equivalently replace the zero switch state, and replace v0 or v7 with two non-zero vectors with opposite directions such as v1-v4, v2-v5 or v3-v6. The reference voltage of this modulation method is synthesized by 4 different switching vectors.

The 3FB-SC topology is similar to the ordinary three-phase bridge topology, but the difference is that the photovoltaic module array on the input DC side and the bus capacitor are each split into two parts, as shown in Figure 1, the midpoint on the DC side is connected to the neutral point on the grid side.

The switching modulation method used in this topology can follow the modulation strategy of the traditional three-phase bridge topology. It can be seen from Figure 1 considering parasitic parameters that the voltage across the parasitic capacitance of the photovoltaic panel is always half of the DC bus voltage. The voltage across the capacitor CPV remains basically unchanged, so the leakage current is effectively suppressed.

3. Three-phase topology based on single-phase 3L-NPC half-bridge topology in parallel

The non-isolated topology of 3L-NPC has been proven to be effective for single-phase grid-connected systems. Similarly, it can be combined and applied to a three-phase system, as shown in Figure 2. The control strategy of the three-phase 3L-NPC topology can be similar to the single-phase topology, and only needs to adjust the phase difference of the modulation wave of each phase by 120°. As analyzed in the single-phase system, the common mode voltage on the parasitic capacitance CPV can always be maintained as half of the DC bus voltage, and the leakage current can be effectively suppressed.