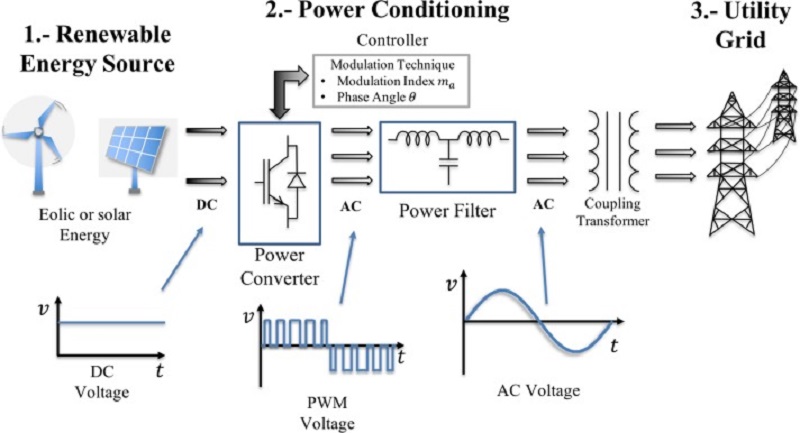 The series or parallel approach of passive resistors increases system damping to address the resonance problems inherent in LCL filters. As shown in Figure 1, the passive damping method of series resistance on the capacitor branch can attenuate the LCL resonant peak to a large extent, so that the amplitude-frequency curve is below the 0dB line near the resonant frequency, so that the open-loop phase crosses -180° The amplitude at the frequency is no longer greater than 0dB, thus satisfying the stability criterion. Note that the resistance value of the capacitor branch in series is Rd, taking the inverter side current feedback as an example, the transfer function from uinv to iL1 becomes

Figure 2 shows the open-loop amplitude-frequency and phase-frequency characteristic curves of inverter-side current feedback control using passive damping (parameters are the same as in Section 5.3). When the amplitude gain is greater than 0dB, there is no intersection between the phase-frequency curve and the -180° curve, and the closed-loop system is stable. In addition, the phase margin is maintained at 45° and the amplitude margin is 5~9dB, and the dynamic response of the system is good. The main cost of this passive damping method is additional power loss, and the following will introduce several methods to reduce losses and their principles.

Figure 4 shows a passive damping method for reducing losses by paralleling inductors and capacitors, which is an improvement on the method in Figure 3. Its essence is to shunt the switching frequency sub-harmonic current through a capacitor, that is, by selecting an appropriate capacitor value to ensure that the impedance value of the capacitor Cd at the switching frequency and above is much smaller than the impedance value of Rd. In addition, similar to the method in Figure 3, the parallel inductance and capacitance should not be too large to affect the damping characteristics near the resonant frequency, that is, the size of the parallel inductance Ld should satisfy the above formula, and the size of the parallel capacitor Cd should satisfy:

Two relatively simple methods for further reducing the loss of passive resistors are given above, and other circuit modification methods will not be repeated. It should be noted that the essence of this type of method is to construct a shunt branch to reduce the current components flowing through Rd except for components near the resonance frequency. Although the loss is reduced, the circuit structure becomes complicated.