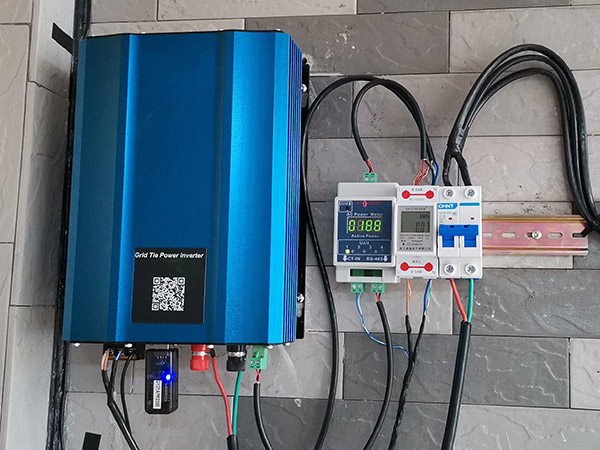 It should be noted that, as mentioned above, at the zero-crossing point of the modulation wave, that is, near the zero-crossing point of the grid voltage, the instantaneous duty cycle of the bridge arm output voltage is very small, and the voltage distortion caused by the non-ideal factors of the device is more obvious than the ideal bridge arm output voltage at this time, which makes the incoming current more prone to distortion. Here, the unit power factor operation of the inverter is analyzed first, and the zero-crossing distortion of the incoming current caused by the dead time and the non-ideal factors of the device is not considered, and it is considered that the current transitions smoothly at the zero-crossing point. According to the approximation theory of equivalent area, the average error voltage waveform of the output voltage of the bridge arm of the inverter in the power frequency modulation period can be obtained, as shown in Figure 2.

In the case of non-unity power factor, the dead time td also affects the output voltage uinv of the bridge arm of the inverter. Assuming that the power factor angle is θ, that is, the phase difference between the voltage and current is θ, the square wave amplitude ΔU’m of the average error voltage at this time is shown in formula (1.2). According to the symmetry, the average voltage amplitude of the negative half cycle of the grid is -ΔU’m.

In the case of unity power factor, ΔU’m=ΔUm. It can be seen from formula (1.3) that the non-ideal characteristics of the power device not only affect the fundamental wave of the output voltage of the bridge arm, but also bring a large amount of harmonic voltage. Since the positive and negative half cycles of the photovoltaic inverter work symmetrically, the harmonic components only contain odd-numbered terms. In addition, the magnitude of the harmonic voltage is inversely proportional to the harmonic order n, so the low-order harmonics (such as the 3rd, 5th, 7th, etc.) in the output voltage of the bridge arm are relatively large. Since the low-order harmonics are difficult to be filtered out by the filter, these low-order harmonic components become the main factor causing the waveform distortion of the incoming current.